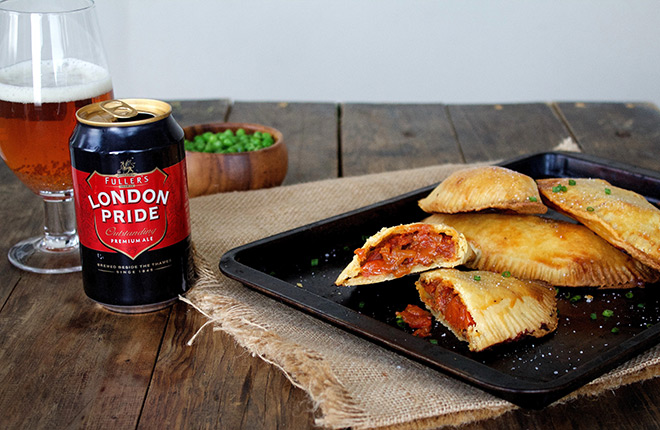 October is all about rugby and national pride. So in honour of Fuller’s London Pride making its way to sunny South Africa, we’ve put together a game-day dish the marries the best of both nations. Think classic wors and smoor flavours then stick ‘em in a buttery crust pie. Is therea pie more awesome than a boerewors pie? We didn’t think so.

1. Start by making a small fire so that when your sauce is finished the coals are ready to go.

2. In a medium-sized pot, fry your onions until they are soft. Add the garlic, chipotle, cumin, coriander and paprika then fry for a minute until fragrant. Add the chopped tomato, Fuller’s beer, beef fond, sage, thyme and sugar and mix to combine. Simmer on a medium heat for 30 minutes until most of the liquid has reduced and you’re left with a thickish smoor. Leave the smoor to cool completely before making your pies.

3. Braai the boerewors over hot coals for 6 minutes a side. You can leave the wors a little pink on the inside as it’s still going to be baked in the pie. Slice the wors into pieces then dice into a slightly coarse ground.

4. To make the pastry, mix the flour and salt in a large bowl. Then bring the water and butter to a boil in a small pot. Make a well in the flour and toss the melted mixture into the middle. Mix with a big spoon until the dough comes together. When you’ve got a ball of dough you’re done. Let it cool for a few minutes and you’re good to start.

6. Roll the dough out on a large, lightly floured surface until it’s about as thick as a R5 coin. (6 mm) Then use a cereal bowl to cut circles out of your rolled dough. The size of your pie will depend on the size of the bowl. When you’ve got your dough circles, you’re ready to make the pies.

7. Place a small amount of wors onto one half of the dough circle, not too close to the edge of the pastry. Next spoon a small amount of the smoor on top of the wors. Now fold the other half of the dough over to form a half moon shape. Then, using a fork, press the edges together to seal the pie. Repeat until your dough is finished. You will be tempted to overfill your pies but rather don’t. If they are too full you will battle to seal them and they will crack.

8. Brush the pies with your egg mixture and bake for 45 mins to 1 hour in an oven set to about 180℃ until the pastry is golden brown.

Share the pies with your rugby watching crew and wash them down with a Fuller’s London Pride, also available in October’s Mixed Case.