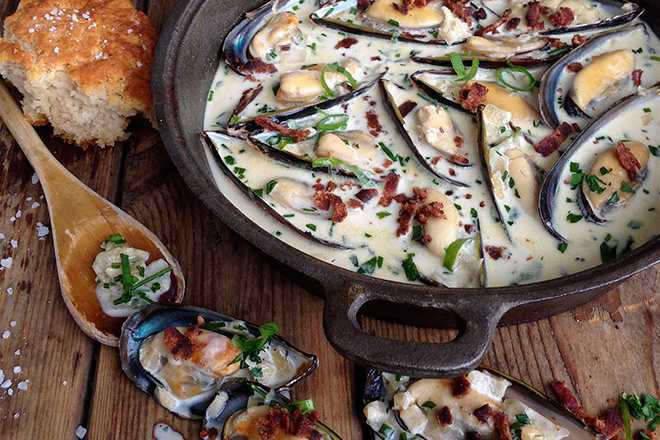 As SASSI Ambassadors, we’re very conscious of our seafood choices. Luckily for us, mussels are on the green list and they’re one of our favourites. Now, this is not your average mussel pot. It’s made with beer, bacon and cream, and it’s been known to turn non-mussel eating people into savage mollusc predators. Beast of the Deep with its low bitterness, honey character and biscuity vibes is the perfect match for this creamy pot. 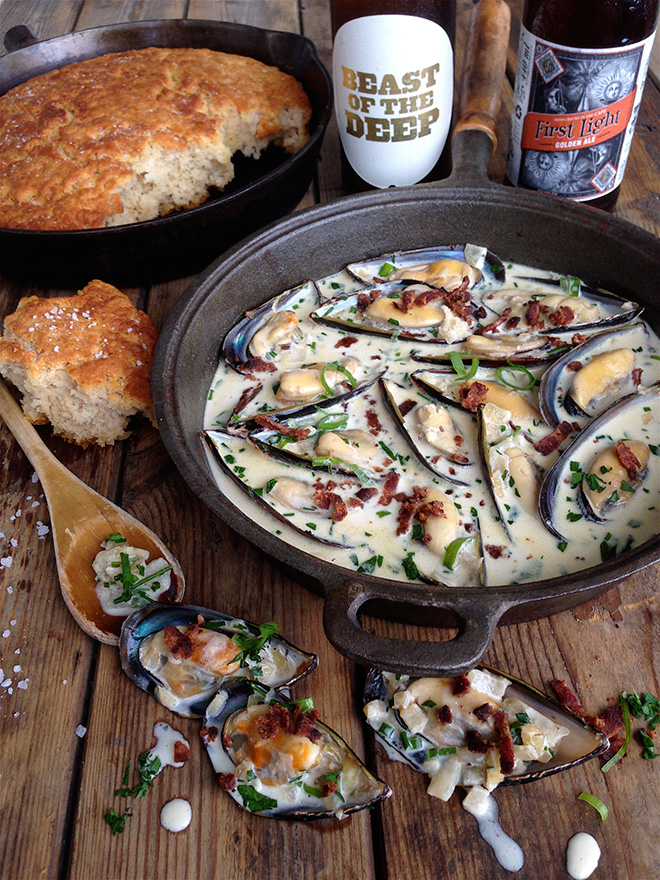 1. Fry your bacon in a non-stick pan slowly to get it nice and crispy – don’t rush it. Alternatively grill it in the oven on a roasting rack until crispy. Allow to cool then chop roughly and set aside.
2. Heat a little oil in a medium potjie pot over the coals or a medium pot on the stove.
3. Fry onions until they start to get a bit of colour then add your garlic and fry for a couple of minutes.
4. Pour in the beer and bring to a boil.
5. Add the mussels and steam with a lid on for about 4–5 minutes.
6. Take off the heat and stir in the cream and all the greens.
7. Serve with generous amounts of bacon sprinkles and plenty of beer bread for mopping up.
8. Once the mussels are finished, drink the remaining beer cream sauce with a straw.

Some of the best recipes in life are the ones that find you unexpectedly. This go-to beer bread comes from the wife of Mitch Lockhart of the Devil’s Peak Brewing Company. We were at a beer festival, she was there with a loaf and that day the universe smiled on us. This recipe works great in the oven or over the fire in a flat bottom potjie pot. Just a heads up though, if you’re not experienced in fire baking then stick to the oven. Fire baking can get ugly quickly if it’s rushed.

Ingredients (makes one loaf or pan):

1. Preheat the oven to 180°C.
2. Mix your dry ingredients together, then pour in the ale and mix until combined.
3. Spread the sticky dough into a greased or baking paper-lined pan.
4. Pour the melted butter over the dough and pop it in the oven.
5. Bake for roughly 45 minutes. When the crust starts to turn golden, you’re just about done. If you really want to give it a golden tan then put the grill on for a couple of minutes, but keep an eye on it – it’ll burn quickly.
6. When you’re happy with the colour remove from your loaf tin from the oven and crack some sea salt over the top.
7.  Smash it in your face.

This recipe works with just about any beer and you can really taste the beer in the bread. Once you’ve got this one down, we suggest trying a dark ale or stout to give the bread a lekker roasty vibe. You can pair this with mature cheddar and farm chutney. Then try a honey ale and pair that with strawberry jam and Camembert cheese. You get the idea. Is anyone else really hungry all of a sudden? 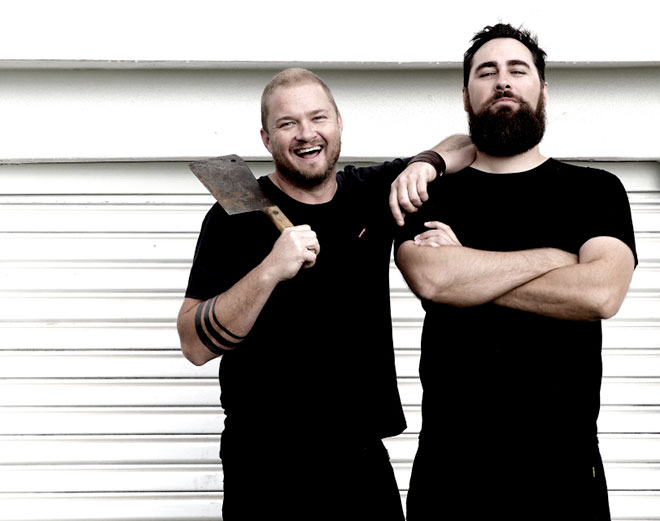 When people stick to their guns and chase after their passions and dreams like bloodhounds, nose to the ground, epic things are bound to happen. The story of Karl and Greg is no different and aligns itself nicely with our own mission in life, which really boils down to beer. Meet Beer Country!

Remember that wild card reality TV show, the Ultimate Braai Master, run by outdoor enthusiast Justin Bonello? Well, season 1 wrapped up a little while ago now, and Greg and Karl were two of the finalists that made it through that gruelling juggernaut of all things food and fire.

In fact, it’s safe to say that their passion for food, fire and beer is more of an obsession, really. In some circles, namely vegetarian and gluten intolerant ones, they’d call it an indecent obsession (not the strawberry lips kind). This has now become their very own braai and beer TV show. As hosts of Beer Country, these two will be heading out on every guy’s dream adventure to discover the breweries behind our booming craft beer industry, source some amazing produce and cook epic chow over the coals wherever the road takes them.

Along the way they’re most definitely going to taste some incredible craft beers, which is why they are now also ambassadors for League of Beers. Sounds like a good partnership, right? You bet.

Beer Country will be a journey of discovery, one of hearing the stories behind the beers and meeting the pioneers on the brewing front lines. It’s a tough job but luckily these two thirsty guys are up for it, for the greater good of beer culture in South Africa of course. It’s all very noble. Essentially, they’re doing it for you.

So watch this space, mense, for South Africa’s first TV adventure about beer, braai and the open road. We’ll be sharing the occasional recipe for some good grub right here on the League of Beers blog too, so you can feel like you’re part of the action.

With thanks to CrushMag Online for providing the image of Beer Country.